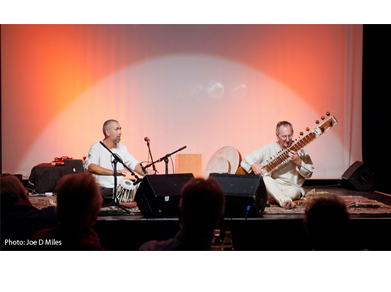 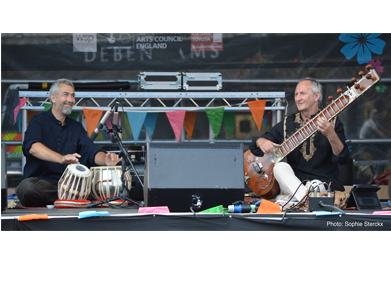 Swara sitar & tabla duo - Jon (tabla) and Ricky (sitar) have been thrilling and entertaining audiences throughout the UK since 2001.
During this time they have developed a reputation amongst Indian music lovers nationally for their on stage rapport & spontaneous and playful musical dialogues.
The many positive responses from audiences highlight their engaging and dynamic performances that begin with slow, meditative melodies unfolding into complex exciting rhythmical interplay.
Swara were performers at the National Celebration of British Asian Live Arts in 2008 and were voted 'Best Group' in the MTM South West & South Wales Asian & Ethnic Minorities Awards 2014.

We are flexible to perform at any time of day. We perform at Arts Centres, Festivals, Melas & Cultural events. Also Weddings & Corporate events.

South West based and will travel to these areas: South West, Midlands, Wales, Ireland.

" . . .The brilliant sitar of Ricky in duet with Jon's tabla wizardry was a first class example of musicians "playing off" each other, their evident joy never becoming indulgent, and never compromising the aims of the music. . . ." – Colin Sell, BBC Radio 4.


"...the near capacity crowd enjoyed an evening of spellbinding music, which the majority had never heard live before. The reaction of seemingly everyone present was overwhelmingly positive...a superbly atmospheric and fascinating evening's entertainment which delighted everyone present." - Tony Hayward - Ilminster Arts Centre.

“From the moment I heard you both play at a friend’s wedding a few years ago I knew that I had to contact you when it was time to plan my own wedding. After playing Viren a few videos and music clips from your website he quickly agreed that you would create the exact ambience we were looking for. You both created an atmosphere which is more than we could even imagine, you knew what song to play and at what time to play it and I had no concerns about what music would be played when I made my entrance. We had lots of compliments about the music during the ceremony, my dad especially, who loves classical music was in complete awe of what he was listening to on the day. Words are not enough to describe how beautifully you both played. Thank you so much for being such an important part of our day and being there to share at witness such a special occasion.” Priti Parmar

“Our wedding was made even more special by these fantastic musicians. Flexible to our schedule, perfectly presented and the music was just amazing! We hadn’t told guests about this part of our event so everyone looked up to work out where the wonderful sounds were coming from. We had so many compliments about the music and guests wanted to talk to the musicians and pay their compliments. I want to have another event just to have them play again! ” Rehanna and Priyesh.

“Dear Ricky and Jon- I want to thank you from the bottom of my heart for the absolutely beautiful music you played for us yesterday. I cannot tell you how many people praised you and Jon-I really think you made the wedding what it was and I am so grateful. It was uplifting and stood out but the sounds also interwove beautifully with the priest’s words creating the perfect balance. It was a real treat for our guest. I’m very grateful.” Dr. Shreyaa Patel.

Thank you both so much for playing the sitar and tabla on our wedding day, to welcome our guests and during our wedding ceremony. The music was utterly beautiful and you both did a perfect job of being sensitive to the Indian ceremony, playing at exactly the right volume to create a magical atmosphere and also pausing during the appropriate moments… So many of our guests commented on the music, and also on how interesting you were to talk to – and even the priest was impressed by the sensitivity with which you played! We will be sure to recommend you to friends and are already wondering when we might have another party where you guys could play again… Sonia Mohindra – Wedding at Mandarin Oriental Ballroom, Hyde Park.

“Thank you so much for performing at my daughter Jessica’s wedding at North Cadbury Court to a very international mix of guests.
We were delighted with your duo performance . It was wonderful and enhanced the enjoyment of the wedding celebrations. Many of our guests commented on the excellence of both the Sitar and tabla playing.
I very much hope we will have the opportunity to listen to you again. Thank you both again,
Best wishes, Prof B K Sandhu OBE”