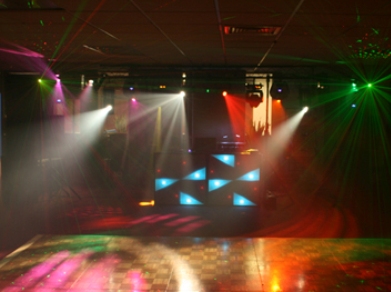 With over 20 years experience in the entertainment business, Paul 's philosophy is simple - "excellent music, high quality equipment and attention to detail".

Specialising in evening wedding receptions, from the bride and groom's first dance to their last, your wedding reception will be one of the most memorable days of your life, and for all the right reasons.

Using only sophisticated sound and lighting, Paul offers the best music to suit all ages, shapes and sizes, with volume control to suit your taste.

Paul's vast music library, updated weekly, spans over five decades of the most popular music so you can rest assured of having exactly the right sound to suit your audience and your function.

Using state-of-the-art lighting and sound systems ensures that your music can be played as soft as a whisper or amplified to create the perfect party or motivational mood.

All equipment is covered by an up to date PAT test certificate.

Paul holds a current Public Liability Insurance Policy (PLI) which is a requirement of many venues, he is also able to carry out a risk assessment if needed.


Should your function be themed then Paul always endeavour's to blend with whatever theme you have decided upon.

He can change the look of his equipment, the music played and the dress code to coordinate with the theme of your event.

More commonly, most events require Paul to be wearing the traditional dinner suit and black tie.

I carry enough sound equipment to provide upto 6.5KW but will only set up an appropriate system for the venue on arrival.

Lighting is state of the art using a variety of intelligent lights, LED systems, Lasers and colour washes.
Lights are linked to a computer control system to provide a professional show.

For marquee work I take my own large generator to ensure that the power supply is more than adequate.

North West based and will travel to these areas: North West, Scotland.

Knowing what the crowd want.
Focussed on the enjoyment of the guests at the fucntion.
Professional service in every respect.